The Circus (originally known as The King’s Circus) is one of the crowning achievement’s of Bath’s renowned architect of the 18th century, John Wood the Elder. He started construction in 1754 which was the same year he died, so he tragically never saw it completed, but it was completed by his son. The Circus is a circular residential development built of the honey-coloured Bath stone, in the Palladian style. It reflects Andrea Palladio’s ideals of balance, harmony & symmetry which he experimented with when building in the Republic of Venice during the 16th century. Wood was highly influenced by this form, and many believe the Circus to be his best work. Today, The Circus retains its sense of 18th elegance and remains primarily residential (please be sensitive to residents when enjoying the beautiful architecture here). It is renowned around the world as being one of the iconic pieces of architecture in our city.

Neighbouring The Circus, is the Assembly Rooms, also built by John Wood but in this case it was John Wood the Younger (son of ‘the Elder’!) who completed this fine entertainment venue in 1771. It is also still used for its original purpose – to provide a venue for entertainments to the masses. Its lavish interiors include a grand ballroom, a tea room, and the Octagon, all of which have been seen regularly in movies & TV shows reflecting various periods.

We explore this area in our mini-tour, taking in the honey-coloured facades and some great places to eat, drink, and watch the world go by. Join us once again, as we explore yet another intriguing, and beautiful part of this stunning city. 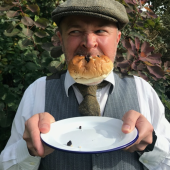